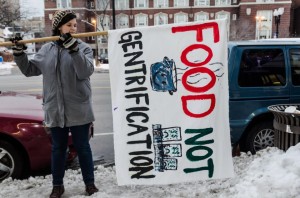 Hundreds of people gathered outside the office of Alderman James Cappleman, a representative for the 46th ward of Chicago, on March 6th. Cappleman has become infamous in Chicago for banning a Salvation Army food truck from his ward, making it illegal to be in bus shelters if you are not waiting for a bus, and pursuing many other anti-homeless policies, including closing low-income housing.

Various groups have claimed he is fighting a one-politician “war on the poor,” and are particularly critical of his choice of timing; making shelter and hot meals even more scarce in the middle of winter.

While the Salvation Army food truck scandal appears to have been resolved, Chicago Food Not Bombs as well as new community start-up Uptown Uprising appear to just be getting started, so follow their good work going ahead – and find out who the pro-hunger politicians are in your community!