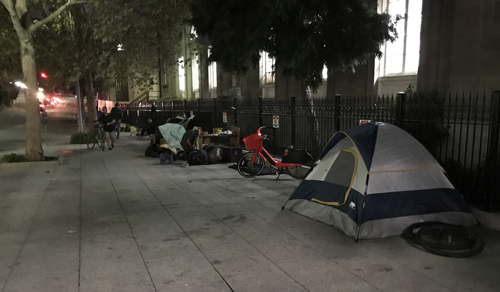 Santa Cruz City Manager Martin Bernal knows who he works for and it isn’t the resident of the city. Our city like most in the US is controlled by property speculators and transnational corporations. This is a nationwide deliberate war against those forced to live outside. A war against the poor.

The heartfelt suggestions during City Council to bring in the very capable Nonviolent Communication volunteers to mediate the dispute between councilmembers is not a solution to the crisis in city government.

The real people who we would need to mediate with would be Wells Fargo’s CEO C. Allen Parker, John Smaby, president of the National Association of Realtors and Reihan Salam, president of the Manhattan Institute. I doubt that using nonviolent communications to mediate with them would do little to change their designs on Santa Cruz or any of the hundreds of other communities they intend to profit from.

It is time we get wise to this and start to organize against the banks, corporations, think tanks and property speculators that are driving up rents and keeping wages unlivable.

The Assistant City Manager, Susie O’Hara, smeared Councilpersons Krohn and Glover to help the recall campaign to rid an obstacle to their plans to maintain the control of our city for the wealthy, most of whom don’t even call Santa Cruz home.

Susie O’Hara also made false claims in Federal Court telling Judge Davila that there would be enough shelter “beds” for those evicted from Ross Camp evicting at least 200 people into the doorways and patches of land along the highways.

But this should not have been a surprise to anyone who had followed her history of coordinating local campaigns against the homeless.

For example the Good Times December 2014 article notes, “To gain more insight into the issue, Coonerty has recruited Susie O’Hara as a part-time aide. O’Hara is a former Santa Cruz City staff member for the Public Safety Task Force, and coordinates the Downtown Accountability Program, which she will continue to do after Coonerty takes office.”

“We’ll be focusing on public safety, and especially around the coordination between our government agencies and nonprofits to manage our public safety challenges in Santa Cruz,” says O’Hara.

The public safety challenges she speaks of are the homeless who are forced to sleep in the doorways because her office has successfully blocked the building of affordable housing, addiction treatment and mental health programs or the many other services suggested to reduce the suffering of people forced to live outside.

On October 21, 2019, I was approached by a 45 year old woman who had just become homeless in Santa Cruz. She told me that she had just moved into the camp outside the downtown Post Office to find safety after spending a few nights alone in a downtown doorway where she feared she would be raped.

That same night a couple hours after visiting with Dream Catcher and Cooper at Little Red Church Coffee House I learn that my friends were evicted from the grounds of Louden Nelson Community Center. They had been forced off the Main Beach a few weeks before in a campaign of cruelty organized by Susie O’Hara.

Before Susie O’Hara and Martin Bernal supported the Recall Campaign using city funds to orchestrate a sexual harassment drama they helped Mayor Watkins deflect Drew Glover’s attempt to review potential solutions to the homeless crisis. Watkins refused to place Councilmember Glovers items on the City Council agenda and when Glover finally started to introduce the subject Susie O’Hara took his proposal to consider all of the over 500 city parcels for potential transition camps to replace Ross Camp and she rejected all but one, the parking lot near Depot Park; called it a safe sleeping site and was able to mobilize the West Side homeowners and their violent allies at Take Back Santa Cruz against the proposal.

The angry anti-homeless mob even mimicked “Seattle’s Dying” chanting “it’s not a homeless crisis, it’s an addict crisis” just as the people had chanted in the film Chief Mills had tweeted that morning. And if that were not bad enough O’Hara and Bernal were able to have the public believe that it was an ill conceived proposal of Glover.

The Recall Campaign seeking to remove Glover and Krohn because of their support of the homeless is only one of three such recall initiatives in California all sharing the same argument that these political leaders are threatening the health and safety of the community but not addressing the homeless crisis. An effort in Chico, California, to recall Mayor Randall Stone and City Councilor Karl Ory was initiated in May 2019. An effort in Los Angeles, California, to recall Mayor Eric Garcetti was initiated in June 2019.

Santa Cruz Unite bragged to the audience at their get out the petition event at the Police Department’s Community Room that they were also the people behind Santa Cruz Together, the group that had opposed the rent control measure.

Santa Cruz Together raised over $750,000 but told the Sentinel that it only need $250,000 to defeat the Rent Control measure M. They were able to defeat rent control but were not able to defeat Drew Glover. This might be why Santa Cruz Unite was able to pay petitioners as much as $6 to $10 for a valid petition signature for a recall. They were also able to mail out a slick full-color brochure to thousands of households that included the return address of Santa Cruz Together along with its fabricated information. The California Association of Realtors and The National Association of Realtors were among the groups providing funds for the campaign.

This is phase two of America’s war on the homeless and is certainly the most dangerous. Phase one started in the mid-nineteen eighties with the Broken Window Theory, claims their economic problems were caused by the presence of homeless people and the creation of “Quality of Life” crimes directed at the homeless.

They have put Phase two into motion with their plan to force those who live outside into government facilities. The campaign includes the messaging of the Manhattan Institute, their offspring the Discover Institute and their claim that homeless people are drug addicts who will never get jobs and therefore will never rent apartments so there is no reason to build affordable housing.

The Discovery Institute’s June 2019 essay in the Manhattan Institute’s City Journal “An Addiction Crisis Disguised as a Housing Crisis” by Christopher F. Rufo suggests that there is a scholarly argument against claims that high rents, low wages or other economic policies have anything to do with the increase in those living without housing.

Rufo ends “No matter how much local governments pour into affordable-housing projects, homeless opioid addicts—nearly all unemployed—will never be able to afford the rent in expensive West Coast cities. The first step in solving these intractable issues is to address the real problem: addiction is the common denominator for most of the homeless and must be confronted honestly if we have any hope of solving it.

Manhattan Institute Fellow Heather Mac Donald “No one has a right to live in the most expensive real-estate market in the country, certainly not on the public’s dime. It isn’t clear why any city is morally obligated to provide housing to someone who starts living on its streets.”

This is also the message of the film “Seattle’s Dying” and Fox’s Emily 1 ride pass homeless camps in Los Angeles pointing out rats repeating that each camp is a vector for disease.

It is also the logic of many politicians.Former Democratic California State Assemblyperson Mike Gatto had advanced this theory in a June 2019 OpEd in the San Jose Mercury News, “So if economics aren’t the issue, what is? Two things. About 40 percent of homeless are addicts and another 25 percent have severe mental illness. In other words, over two-thirds of the homeless suffer afflictions that diminish rational behavior.”
Fox’s Jesse Watters comments on the increase in those living outside in Los Angeles saying, “you only have one solution. You bulldoze the 50-block radius, and you institutionalize everybody and detoxify them, and then you let them out.”

The Washington Post story, “Trump paints a dark picture of homelessness in cities: ‘We may intercede’ in the July 1, 2019, Trump interview with Tucker Carlson adds a frightening voice to the war on America’s homeless.

Trump responds, “Police officers are getting sick just by walking the beat,” he claimed. “We cannot ruin our cities. And you have people that work in those cities. They work in office buildings and to get into the building, they have to walk through a scene that nobody would have believed possible three years ago.”

“We have to take the people,” he said. “And we have to do something.”

“When we have leaders of the world coming in to see the president of the United States and they’re riding down a highway, they can’t be looking at that,” he said. “They can’t be looking at scenes like you see in Los Angeles and San Francisco . . . So we’re looking at it very seriously. We may intercede. We may do something to get that whole thing cleaned up.”

A Trump administration official says, “We’re not rounding up anyone or anything yet” during a tour of an unused FAA facility in September.

California Democratic leaders are also considering a plan to make it illegal to live outside, aggressively promoting the idea that the homeless will be obligated to accept shelter.

Mayor Steinberg and Supervisor Ridley-Thomas call for California to adopt a right to shelter and the obligation of those living outside to accept it.

“I don’t think there’s anything wrong with saying that living on the streets is not a civil right, that you have to come indoors. How we enforce that, work on that, will be for debate and discussion and a lot of good work ahead,” announces Sacramento Mayor Darrel Steinberg and Co-chair of Governor Newsom’s new homeless task force on July 17, 2019.

The city and the county of Sacramento have also joined the appeal to the Supreme Court against the Ninth Circuit Court of Appeals ruling that ticketing and arresting people that do not have access to shelter is a violation of the US Constitution’s Fourth Amendment prohibition against cruel and unusual punishment. The Sacramento County Sheriff Department deployed riot police to clear a homeless camp in south Sacramento this spring.

California laws expanding Conservatorship by counties of the homeless, the failure of the community to speak out against the proposal for people to be obligated to accept shelter and calls by think tanks and national media and the Trump administration to intern the homeless is frightening.

The drumbeat message that the homeless are nothing more than vermin who need to be cleaned up has become normalized. Hardly anyone publicly denounces this frightening narrative.

The phrase “life unworthy of life” or “Lebensunwertes Leben” in German was a Nazi designation for the segments of the community which, according to Hitler’s regime of the time, had no right to live. Germany’s homeless were among the first to fill the camps.

We cannot let this happen here. We are homeless, not helpless. We built America.