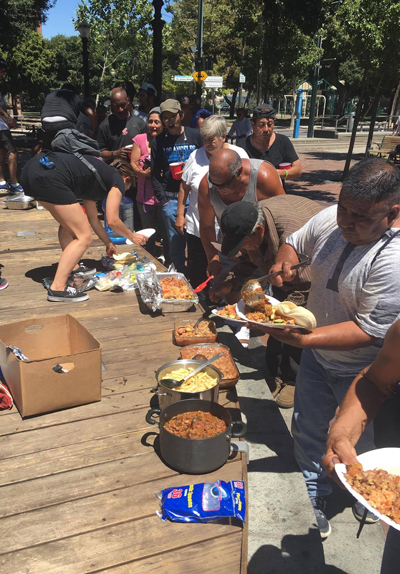 San Jose Food Not Bombs to continue sharing free meals with the hungry at St. James Park regardless of the city’s plan to ban the decades old practice.

Please consider helping us share food without a permit — an infraction or maybe even a misdemeanor — at St James Park in San Jose at 2:00 PM on August 6, the 72nd anniversary of America’s nuclear bombing of Hiroshima.

Food Not Bombs has been sharing free vegan meals at the park for more than 15 years, and is just one of many groups that have been sharing meals there with the hungry.

“We believe that it’s a church’s right to be able to feed the poor,” said Pastor Scott Wagers of CHAM Ministries, which has been sharing meals with the hungry in St James Park for 20 years. “That’s an extension of our religious freedom, and the bottom line is we’ll fight for this.”

Matt Cano, assistant parks and recreation director, in an attempt to justify the ban, told the San Jose Mercury News that “Everybody is really focused on making sure that the daily experience of everybody using the park, whether it’s a resident who lives near there or someone doing business near there, is a great experience. We are trying to reactivate the park, with things like yoga, movies at night, running clubs. We all need great open spaces.”

Councilman Raul Peralez wrote a letter to homeless advocates — again attempting to justify the ban — saying, “Feeding our homeless must be done in a manner that is consistent and combined with the other wrap-around services that our homeless neighbors need to get back on their feet.”

Councilman Peralez is advancing the failed theory that “street feeding” enables the homeless to stay homeless and that they would have access to recovery programs and jobs if they where unable to get meals on the streets and were forced to eat indoors at “established” programs.

Why are they doing this now? Participants in the social networking site Nextdoor generated e-mails to city officials urging them to stop the sharing of meals at St James Park. This e-mail campaign might not have reflected the true feelings of many in the community and may have be inspired by the police and business interests. [Editors’ Note: Nextdoor is largely populated by the type of busybodies who infest neighborhood associations.]

Fortune Magazine reported in July 2014 that “Nextdoor had formed more than 170 partnerships with police departments and agencies, add[ing] new cities at a much faster clip, potentially leading to a new phase of growth for the site.”

“I view Nextdoor as neighborhood watch for the 21st century,” says Lt. Chris Bolton of the Oakland Police Department, who helped pilot his department’s partnership with Nextdoor in April 2014.

So, that’s in part where the impetus for the new policy came from. On July 28th I called the Department of Parks, Recreation and Neighborhood Services director’s office to find out if churches feeding the hungry at St. James Park would be cited with an infraction or a misdemeanor.

The woman I spoke with at the director’s office, explained that the policy of trying to end food sharing in St. James Park was not limited to that park, but would include all city parks. She claimed it would be a violation of the Santa Clara County’s Environmental Health Department’s food permit policy and had nothing to do with the city, but when asked if the police would be calling the county she did not think so. She also explained that the policy was “a work in progress” and that no law against sharing food was in place yet. “Right now its just educational. We are directing people to wrap-around services.”

After a few more questions she said the police might issue tickets related to violation of the Prohibited Articles in Park Municipal Code 13.44.090 that carries a fine of $100 or they might even cite people for an unspecified misdemeanor. “That would be up to the police.”

I asked if she knew where the idea of providing wrap-around services originated. She had no idea and she directed me to Ray Bramson, Director of Housing. I could not reach his office. Those wrap-around services seem to include Food Not Bombs, since I receive at least one or two calls every few months from hungry people referred to San Jose Food Not Bombs by San Jose Social Services.

Over 70 American cities have passed laws banning or limiting the sharing of free food outside in public spaces. So far in the first seven months of this year, authorities arrested Food Not Bombs volunteers in Tampa, told Miami Food Not Bombs volunteers they couldn’t share food, and have introduced a new ordinance against sharing meals outside in Ft. Lauderdale, Florida.

During the past six months police told Food Not Bombs to stop sharing meals in Buffalo, New York, Eureka, California, and sent health department officials to interfere with Food Not Bombs in Champaign Urbana, Illinois. The struggle for the right of Food Not Bombs to share meals outside in Houston, Texas is also heating up, and anti-homeless advocates in Santa Cruz, California continue their attempts to close the twice weekly Food Not Bombs meal.

Public outcry against these efforts to stop people from providing free food for with the hungry has inspired the creation of the myth mentioned above about the dangers of “street feeding,” claiming meals shared on the streets “enable the homeless” and discourage them from seeking recovery services. This theory is being adopted by cities all across the United States as justification for laws banning free meals.

Robert Marbut, a consultant hired by cities to address homelessness, is likely the most prominent advocate of this theory, and has been hired as a highly paid consultant by several cities. Daytona Beach renewed Marbut’s contract in January 2015 at a cost of $7,201.25 per month for 14 months, plus up to $35,000 for expenses. The new payment will bring Marbut’s total compensation from the city since last year to roughly $185,000.

NPR’s Rachel Martin interviewed Marbut in 2014 after the City of Ft. Lauderdale, Florida generated headlines about the arrest of 90-year-old Arnold Abbott and Food Not Bombs volunteers for sharing food outside the downtown library. Said Marbut, “If you give food on the street, you end up in a very convoluted way, but still an important way, you end up preventing people from going into 24/7 programming.”?

Marbut’s model program is the 37-acre Haven for Hope campus that opened in the summer of 2010 in his home town of San Antonio, Texas. Local media welcomed the opening: “Comprehensive services like those provided at Haven For Hope are typically only available in state prisons.” The campus has 550 closed-circuit television cameras and a staff of 40 security-guards.

The San Antonio Express published an article in 2015 titled “Street feeding causing headaches” It read in part: “When Haven opened in 2010, the city made street feeding of the homeless illegal, unless it’s done by licensed kitchens.” The only high profile enforcement of this law was against a licensed kitchen. Chef Joan Cheever, owner of Chow Train, was cited and threatened with a $2,000 fine for sharing food with the hungry at Maverick Park in April of 2015.

But sending people to Haven For Hope, and the law against sharing food with the hungry on the streets, has failed to force the homeless out of sight. Sixteen years after outlawing “street feeding” in San Antonio, the Rivard Report reported on the Department of Public Works and Haven For Hope’s program of periodic cleanups of homeless camps: “Dozens of homeless camps are hiding in plain sight throughout downtown San Antonio.”

San Antonio is not the only city to witness the failure of programs based on Marbut’s theory.. Fort Smith, Arkansas, Placer County and Fresno, California, Daytona Beach, Ft. Lauderdale, Key West, Sarasota, St. Petersburg and Pensacola, Florida are among the cities that tried Marbut’s program only to find hundreds of people still forced to live in the streets.

St Petersburg, Florida hired Marbut, and at his suggestion opened The Pinellas Safe Harbor facility in the old county jail. According to sheriff’s department data collected from 2011 through 2013, just 7% of those leaving the facility found permanent housing, while 3% went to another shelter or to a friend or relative. Most returned to the streets within a month.

The effort to make it more difficult for people to have access to food (“street feeding” — as if they were animals) comes at time when the federal government is drafting legislation that would cut food stamps, Meals on Wheels, and other aid to the poorest Americans, while redirecting those tax dollars to an increase in military spending and tax breaks for corporations and the 1%.

Trump’s 2018 budget asks for $192 billion in cuts to food stamps over the next decade. He intends to cut funding for after-school programs that help provide food to 1.6 million children, and he is asking for changes that would cut millions of dollars from Meals on Wheels.

Over 13% of the American population currently receive SNAP food stamp benefits, including low income families with children, the elderly, people with disabilities, and those who have recently become unemployed. They receive an average of about $4.17 per day or $1.39 per meal. Nearly half of SNAP recipients are children. That’s 20 million kids or 1 in 4 Americans under the age of 18.

The US Congress just passed a huge increase in military spending exceeding Trump’s proposed “defense” budget request by $18.5 billion. The National Defense Authorization Act (NDAA) would spend $696 billion on the military in fiscal year 2018, beyond President Trump’s requested budget — a budget the White House boosted as a “historic increase in defense spending”. The NDAA received bipartisan support, with 117 House Democrats and all but eight Republicans voting in favor.

There has never been a more important time to support more food and fewer bombs. If you cannot join Food Not Bombs in San Jose on August 6th, please consider organizing a solidarity meal that weekend in your own community. Make a sign or banner supporting San Jose Food Not Bombs and share photos of your action with menu@foodnotbombs.net. Invite local media to report on your solidarity meal.

You can also write San Jose’s mayor Sam Liccardo at mayoremail@sanjoseca.gov and council member Raul Peralez at district3@sanjoseca.gov and tell them to support the right to share meals with the hungry at St James Park.

Food Not Bombs, and the hungry people we serve, would appreciate it.