Welcome to another withering criticism of a large-scale Occupy Miami event! Just kidding…actually for the first time in a long time it felt like Miami and Fort Lauderdale had as much going on as an area with a population of over 5 million deserves. 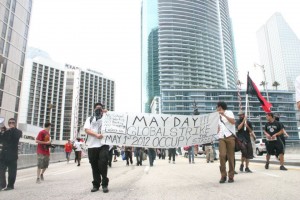 May Day in Miami started with a march starting down Biscayne Blvd. We took the streets and stayed in them. A sort-of black bloc then sort-of shut down the Port of Miami. That was short-lived as an ambulance immediately needed access and some people were pissed that someone tried to block the road in the first place. For these kind of tactics it is a learning experience around here. No one does this sort of thing here, period. So I felt somewhat refreshed just to see it tried, honestly. 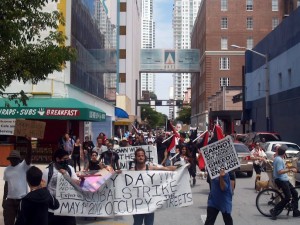 So then we marched up and down Biscayne and Brickell, snarling traffic and jeering at bank buildings. Eventually an arrest finally occurred (which I happened to witness) where an activist that was slowing down the police pushing us by baby-stepping in front of the car got busted. Shortly thereafter a scuffle broke out in which another protestor was beaten and arrested and the cops also knocked one of their own on his face, which drew blood. There was also reports of a squad car that came dangerously close to running over protestors. 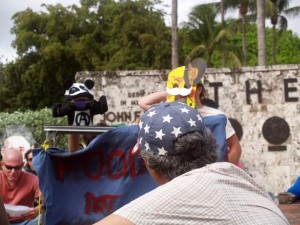 Afterwards there was a puppet show by our collective, the Autonomous Playhouse, and speakers.

AND THEN, another activist was arrested – Alfredo – who was dramatically arrested after the end of the event and is being charged with two counts of assault on a police officer. Which, in my objective opinion, is BULLSHIT!

There were some downsides. The liberals completely and intentionally abandoned the Occupy march in favor of having another show-protest in front of Jackson Community Hospital, and Occupy Palm Beach, which apparently has sworn off direct action, was nowhere to be seen. What was seen, though, was a vibrant level of engagement, especially by anarchists, in the South Florida area that is a new and encouraging phenomenon.

Great work from all involved (especially Miami Autonomy & Solidarity)…let’s do this again sometime.

1 comment for “A Review of May Day in South Florida”