I stepped into the first cab 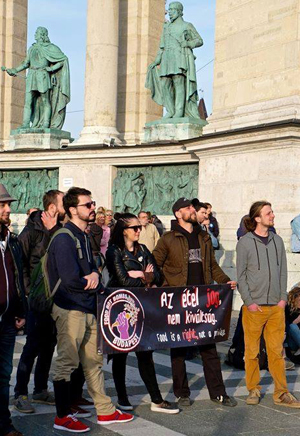 in on the train from Belgrade to Budapest. A silver-haired older gentleman sat against the window on the forward facing bench.

When the conductor arrived I handed him my blue American passport. I could see my compartment companion recoil has he passed his German passport to the controller. He seemed to instinctively press against the window. It looked like he wanted to hide behind the wall of forest green curtains. Why?

“Where are you heading?” I asked.

“I am returning home. I live in Germany” he responded carefully.

I offered that I was from San Francisco. He asked why I was heading towards Budapest.

“I am visiting my fellow activists. I helped start a movement called Food Not Bombs and we have a group in Budapest,” I explained.

He started to relax and asked me more about Food Not Bombs. How did an American effort end up in Eastern Europe? I told him that we had been arrested for sharing meals on the edge of Golden Gate Park and that people responded by starting groups in their local communities.

This interested him and I admitted, some would say bragged, about having been arrested nearly 50 times for sharing meals with the hungry in San Francisco. Even faced 25 to life in prison. I added that the police made nearly 1,000 arrests in all.

“Amnesty International declared anyone arrested with Food Not Bombs ‘prisoners of conscience’ and called for our unconditional release,” I went on.

He admitted that he was not comfortable when he saw my American passport.

“The United Nations called me out of retirement to help draw up a new constitution for Kosovo. I had practiced law in Germany,” he shared.

“You should be prepared to leave the United States,” he went on.

He told of how the US State Department officials he worked with reminded him of the type of people who supported National Socialism when he was a teenager.

“The US delegation has the same arrogance as the Nazi bureaucrats. Even worse are the Blackwater Guards I had to pass through every day. You really don’t have long before the borders to your country will be sealed,” he said with authority.

He told of how even though Kosovo had a centuries-old legal tradition the US were blind to it and insisted that the new constitution include protections for intellectual property and a kind of corporate personhood based on their own misunderstanding of the US Constitution.

His family had to sneak into Switzerland when he was fourteen. They had almost waited too long.

“We thought Hitler was a buffoon just like people believe of Bush. We didn’t take him seriously. After all, we were Germans. We lived in the Germany of great men like Beethoven and Martin Luther.”

By the time we entered the Keleti Station we were allies. Just how long would it be safe to live in the country founded by my forefathers?