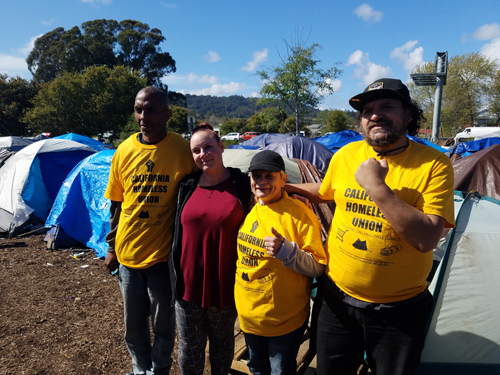 “This cause is a great cause and we’re tired of being treated like dirt. We’re not; we’re human beings. We bleed just like you and we’re good people. We need a safe place and this is a safe place right here.” – Deseire Quintero

Volunteers with Santa Cruz Food Not Bombs wait outside what had been a large homeless camp that welcomed visitors for over half a year.

Residents of the camp, lead by former CalFire firefighter Deseire Quintero, helped draft and file the federal lawsuit “Quintero v. City of Santa Cruz” to block the eviction of the camp in April 2019- but Federal Judge Edward Davila believed the city’s claim that everyone would be provided shelter and ruled the camp could be closed. On May 3rd, Deseire was evicted into the streets with hundreds of others and made camp in a forest park on the edge of town, and a few months later while she was warning a neighboring camp of the danger, the Diablo winds felled a tree- crushing and killing the tiny 55 year old Santa Cruz Homeless Union officer.

Those who had made ‘Ross Camp’ home during those cold rainy months had thought about retaking the vacant land owned by the city of Santa Cruz and Caltrans, but stayed away until Deseire’s death inspired her friends to take direct action.The former residents started to arrive with their survival gear, passed through a breach in the Caltrans fence and set up their tents. The lock on the gated entrance to the site was removed and a welcoming desk was placed inside. Soon after this, Food Not Bombs ordered an ADA compliant portable toilet, a standard port-a-potty and a hand washing station which were delivered the next day.

The self managed transitional camp which grew from the ashes of Deseire took the name of Camp Phoenix in her honor, but only five days later, nearly half the Santa Cruz Police force came and forced the peaceful woman-lead camp to close once again. But that was not the end of the struggle; Food Not Bombs and the California Union of the Homeless, as well as the local Santa Cruz Homeless Union, continue to fight back against the growing attacks on those unable to afford housing (eg, a plan promoted by state and federal officials called “A Right To Shelter and Obligation to Accept It” [which would force all those who live outside into government run facilities and camps] which claims there is “no civil right to sleep on the street”).

The short lived Camp Phoenix wasn’t the first occupation supported by Food Not Bombs, though. Food Not Bombs was started in Cambridge, Massachusetts on May 24 1980 by eight young anarchists and has grown from those humble beginnings to over 1,000 autonomous chapters in at least 65 countries. These chapters share vegan and vegetarian meals and support resistance to the exploitation, war and violence of the state and corporate masters worldwide.

Volunteers fed the June 12, 1982 March for Nuclear Disarmament in New York City; The Nevada Desert Experience at the Nevada Nuclear Weapons Test Site; the 27-day Tent City protest in San Francisco in 1989; Redwood Summer in Northern California; The West Bank Peace Camp at Mas’ha Palestine; Camp Casey in Crawford, Texas; many of the Occupy Wall Street inspired occupations; protests against Exercise Talisman Saber in Australia; a 600-day farmer’s occupation in Bosnia and Herzegovina Square in Sarajevo; World Trade Organization (WTO) protests in Seattle, Genoa, and Cancun; the 100-day Orange Revolution occupation in Kiev, Ukraine; the 2001 Meeting of the European Council in Gothenburg, Sweden and hundreds of other protests.

The San Francisco police made their first of nearly 1,000 arrests for sharing meals with the hungry on August 15, 1988. These first arrests inspired the formation of local Food Not Bombs organizations in Canada, Europe, Australia and many cities in the United States. In 1994, volunteers were recognized as Prisoners of Conscience by Amnesty International, who called for their unconditional release if arrested for sharing food with the hungry. Food Not Bombs volunteers were captured and tortured into confessing to the murder of a solider in the Philippines and an international human rights campaign finally won their freedom after a year in prison.

Food Not Bombs activists in the United States have been framed by the FBI as terrorists. Douglas Wright, Brandon Baxter, and Connor Stevens were among those convicted for an FBI invented plot to bomb a bridge in Cleveland during Occupy. An FBI informant named Anna became friends with Eric McDavid, Lauren Weiner and Zachary Jenson while attending a Food Not Bombs world gathering in Philadelphia; a few months later the police arrested them and Eric McDavid was sentenced to 19 years for a terrorist plot invented by the FBI. His friends won his freedom after he spent a decade in prison. A number of volunteers have been killed by neo-nazis in Russia and by supporters of the drug war in the Philippines.

Food Not Bombs has been active in disaster relief- providing food and material relief to the survivors of the Loma Prieta Earthquake in San Francisco and Northridge Earthquake in San Fernando Valley, Hurricanes Katrina and Sandy as well as Typhoon Yolanda, the Christmas Tsunami, and the 2019 floods in Thaton, Myanmar.

Food Not Bombs activists have also helped to initiate a number of other projects such as Bikes Not Bombs, Food Not Lawns, Homes Not Jails, Indymedia, Really Really Free Markets, October 22nd No Police Brutality Day, and have been active in the Free Radio movement and many other DIY initiatives.

Food Not Bombs volunteers share vegan meals in the Philipeans

The Bank of Boston’s board-members also sat on the boards of local defense contractors and the nuclear power industry. Volunteers hatched a plan to set up outside the Bank of Boston’s annual stockholders meeting, dress as ‘hobos’, and share soup to dramatize the possibility they foresaw: that the economic policies proposed by Reagan and the bank could lead to a future where Americans would have to stand in soup lines to survive. Some worried the impact of the street theater would be lost on those passing by South Station, so two of the activists went to one of the city’s last surviving Depression Era shelters, the Pine Street Inn, and gave a speech to a group of 30 or so men who were trying to sleep on the tile benches and floor. Several in that audience expressed support for the protest, promised to join, and showed up the next day.

That next day, on a cold March noon in 1981, the first Food Not Bombs collective set up their soup kitchen on Atlantic Avenue, and passing business-people expressed shock, asking if the newly inaugurated president’s policies were already tanking the economy. 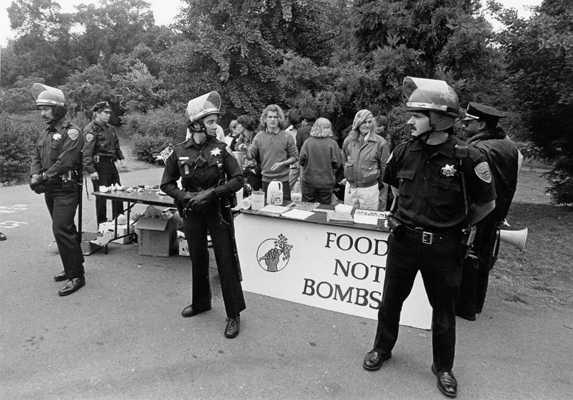 Forty years later, the fears of that blistery spring day have proved true, and volunteers are still finding themselves on the front line of the neoliberal capitalist catastrophe.

There is much to keep protesting into the future, but also 40 years of work to celebrate-

Santa Cruz Food Not Bombs is hosting the Soupstock 2020 Free Music and Art Festival at San Lorenzo Park on Sunday, May 24th. Food Not Bombs groups all over the world will be holding their own celebrations; our local festival will include musicians MDC, Keith Greeninger, Diane Patterson,Paul Damon & The Healing, Gina Rene, and The Beautiful Sky and will be (of course) sharing hundreds of free vegan meals.

Food Not Bombs will also be participating in the protests at the RNC and DNC National Conventions, as well as the Poor People’s protest in Washington DC on June 20, 2020.