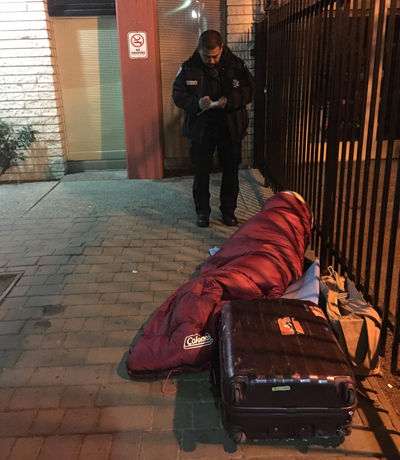 In the 37 years I have been sharing meals with the hungry I have never met so many people who reported becoming homeless for the first time during a single month.

Our neighbor came to our apartment in a panic in late April.

“I work at a jewelry store downtown and my boss’s friend just became homeless. She can’t afford to pay for another night at the motel. Is there a shelter for her to stay at?”

Our neighbor said her boss’s friend had spent last night sleeping outside Verve Coffee on Pacific Avenue. It was her first night on the streets. I told her about the shelter. Sadly it is full and she would be lucky to get in.

A couple of weeks later I was speaking with a man who had come to eat at Food Not Bombs. I asked him about his little white dog, Buddy Boy. He told me he slept outside for the first time that evening. He had been a mechanic maintaining the AT&T fleet but became disabled outside work.

A week later another person eating with Food Not Bombs shared that he had just became homeless. He had been an engineer at a company producing LED lights. They had to lay off half their engineers when they ran into financial difficulty. His unemployment ran out and he could no longer afford his rent. He talked optimistically about how his first Social Security check would be coming in a few weeks.

I met another engineer that day. It was also his first week living outside.

“Where is the safest place to sleep? I slept under a stairway by the parking garage last night but it didn’t seem safe.”

His company also ran into hard times and he lost his job. At 60 he didn’t think he would get another job in his field soon.

The four newly homeless people lived in Santa Cruz before losing their homes. They aren’t “transient,” coming to Santa Cruz because they heard the city offered great services. No, like the eighty-four percent of homeless surveyed in a 2015 Applied Survey Research study, they were living in Santa Cruz County at the time they had to sleep outside.

Trump’s 2018 budget proposes a $6.2 billion cut to the US Department of Housing and Urban Development impacting rental assistance and other programs that help keep people from becoming homeless. Trump is also calling for $800 billion in cuts to Medicaid, the health program for the poor. His budget also asks for $192 billion in cuts to food stamps over the next decade. With a Republican majority and a Democratic party that dances to Wall Street we can expect much of Trump’s budget to become reality.

Republicans are also seeking to end the Dodd-Frank Banking Regulations put into law in 2010 in response to the housing foreclosure crisis.

“It’s an invitation for another Great Recession or worse,” Maxine Waters, the top Democrat on the panel, said during the House Financial Services Committee’s markup of the “Financial Choice Act”.

People are already finding themselves homeless before the 2018 budget takes effect. Add to that, the deregulation of the banks and we can expect many more millions of Americans to be forced out onto our streets to face the cruelty of local anti-homeless laws and the promise of non existent shelter space.

City officials think they have a “homeless problem” now. They haven’t seen anything yet.