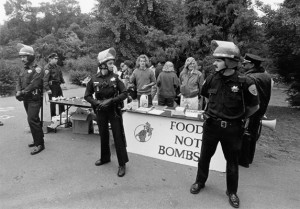 The Santa Cruz Police arrested my partner and I during a sleep out at city hall on Tuesday, August 25, 2015, charging us with felony vandalism and conspiracy to commit a crime. Officers said the suspects spray-painted markings outlining new Blue Boxes for street artists in 33 additional locations throughout the downtown area. We go to court in Santa Cruz at 8:30 AM in Department 1 on Monday, August 31st.

“’In addition to vandalizing the city sidewalks, the act undermines the city’s program to establish safe, orderly and fair use of the downtown sidewalk space,’” said Blaschke.
According to journalist Bradley Allen, “The action of painting blue boxes comes on the heels of two well-known artists, Joff Jones and Alex Skeleton, being arrested by Santa Cruz Police on August 20 for displaying art in front of Forever 21 which, as of recently, is not allowed since the boxes there were removed. A few days later on Sunday, the artists defiantly returned to the sidewalk in front of Forever 21 dressed in Colonial attire with displays of their artwork and a painting of the First Amendment. They were not arrested a second time.”
“My art expresses my social, religious, and existential views. My first amendment guarantees me the right to express that in a public space. My friend Alex and I were arrested yesterday for exercising these rights. Be downtown on Saturday at 12:00pm to see part two. Stand up for your rights!!!”

The morning after the new blue boxes appeared, city officials could be seen outside Forever 21 in a state of confusion as they tried to figure out why the performance space they had removed a week or two before had suddenly reappeared. A guitarist sang outside New Leaf. He expressed excitement at the fact that a new blue box had been placed at exactly the perfect location to reach an appreciative audience.

While the struggle against free expression on Pacific Avenue has a 20 year history, the most recent drama started on September, 10, 2013 when the Santa Cruz City council passed Ordinance 2013-14, an amendment to section 5.43 of the city code that restricts the space allotted for “noncommercial use of city streets and sidewalks” (i.e. street performance) to 12 square feet per individual or group.

After the council vote Dixie Mills, founder of the Santa Cruz Fringe Festival, noted that, “This new ordinance will silently kill the street performer/vendor scene that is so much a part of the flavor of downtown Santa Cruz. If the ordinance just banned this kind of activity all together, there would probably be a big uproar. This way these activities are still allowed, but they are so constrained with rules that slowly but surely we will have a quieter, and less interesting downtown,” she says.  “It seems to me the spirit of Santa Cruz would want to attract these artists instead of making it difficult or impossible for them to share their talents.”

Conflicts between street artists and business leaders forced the issue to be revisited by City Council in the fall of 2014.  The new changes, which were unanimously approved on October 28, 2014 and passed at the November 18, 2014 council meeting, stated that the city would set up 61 color-coded spaces along Pacific Avenue where vendors and performers can stay for up to one hour.

The city never did place 61 color coded spaces along Pacific Avenue but they did paint a couple of dozen blue boxes on the street side of the sidewalks. During the year after the policy was adopted, a number of these spaces were quietly erased without public input, sparking new protests by local artists. It should not have been a surprise to anyone that artists would resist as police and hosts used the disappearance of popular blue box locations as a way to drive them off Pacific Avenue.

Private control of public space is one of many threats to democracy, free expression and the health of our community. Confiscation of public space for private use is common across the United States.  This confiscation has limited efforts to communicate about such important issues as climate destruction, war, racism, poverty and civil liberties. It has limited the public’s access to unique expressions of art, music and theater. It has robbed people of the right to make a living selling their artistic talents. It is a threat to the soul of our community.

I have spent my adult life defending the right to communicate with the community in public. Macy’s and Filene’s  where among the stores that first confiscated public space in the United States with the formation of Downtown Crossing in 1979. Before that, the main obstacle to sharing alternative ideas and culture with the public had been the construction of shopping malls. Malls lured the public away from the public spaces created by downtown shopping districts to privately owned spaces that banned or limited the distribution of information, the selling of art or street performance. Malls became a gate keeper to ideas and free expression. Corporate friendly messages and art were permitted. Any challenge to corporate ideology was eliminated.

Boston’s Downtown Crossing brought this concept of mall censorship to public spaces. An invisible “blue line” was drawn around the center of Boston in the area with the most pedestrian traffic, an area where those with little money or resources could have an audience of thousands.

I discovered this invisible line one morning when I started to set up a literature table outside the Park Street Subway Station in the Boston Commons. Police arrived and told me I had to move and directed me to an office on Washington Street where I could pay hundreds of dollars a week to rent a place on the sidewalk. I refused. I had been setting up my literature at that location for years. After all, there was even a monument to the idea that the Commons was to remain free for all forever. After more threats of arrest, I finally set up just over the invisible “blue line.”

On August 15, 1988, official efforts to remove uncomfortable speech came with the arrest of nine Food Not Bombs volunteers who were sharing free vegan meals and peace literature at the entrance to Golden Gate Park.

During the arrests of 1988, San Francisco Police Spokesperson Jerry Senkir explained to the media that, “There has to be some kind of (police) action. At this point it seems to be a political statement on their part not a food give away issue.”

The effort to drive Food Not Bombs’ message out of sight continued in 1989 after 27 days of occupying Civic Center Plaza.  Police Captain Dennis Martel told the media that, “They (Food Not Bombs) don’t want to feed the hungry, they just want to make an anarchist type statement and we aren’t going to allow it.”

The San Francisco police made over 1,000 arrests in eight years of seeking to silence the message that we could end hunger and homelessness if the country changed its priorities.

One of the first “designated protest zones” or Free Speech Zones was declared by Mayor Andrew Young in Atlanta during the 1988 Democratic National Convention. Free Speech Cages or First Amendment Areas started to become the norm at public events or outside government offices.

The Broken Window Theory of criminology first introduced in the March 1982 article in Atlantic Monthly by social scientists, James Q. Wilson and George L. Kelling, provided justification for a nationwide campaign to confiscate public space and limit the rights of the artists, activists and the poor.

This social theory was used to institute a wide variety of “Quality of Life” laws and policies. Cities across the country started to deploy “City Ambassadors” or “Hospitality Guides.”  A caption on the Santa Cruz Downtown Hospitality Guides page says, “Hosts providing a visible presence in the Downtown area and assisting in maintaining compliance with municipal codes by using educational outreach.”  This study also promotes the “Give a Hand Up Not a Hand out” anti-busking and panhandling campaigns, Sleeping bans, Sit-lie laws and public expression limitations like the “Blue Boxes” in Orlando, Florida, Santa Cruz, California and other cities.

Things sure have changed in Santa Cruz.  Marghe McMahon’s 1978 sculpture of anarchist street performer Tom Scribner was placed outside Bookshop Santa Cruz to honor the street culture of Pacific Avenue. A monument to the very culture they seek to eliminate today.

The spirit of artists like Tom have made Santa Cruz an inspirational place attracting visionaries and tourists from all over the world. Tom Scribner was one of those who encouraged a culture that championed free expression. The retired logger could be heard playing his saw on Pacific Avenue during the 1970’s until his death in 1982. His radical ideas resinated with the street community that made Pacific Avenue home. After all, he had spent a lifetime defending free speech. Tom writes, “Weeks earlier, the local police had begun arresting IWW’s for speaking on the street.  There had been a general strike of the Shingle Weavers A.F.L. and the I.W.W. at the time and free speech had been banned.  Well, the minute the organization heard about that, Wobblies began pouring into Everett to continue the campaign. Wobblies came from near and far just to “speak on the street.”  Of course, they had to be arrested for such a heinous crime so the jails were full. ”

We need the spirit of Tom Scribner and the Free Speech movement to rise again. The confiscation of public space and limits to free expression has had far wider impact than most people realize. Imaginative expressions of art, music and theater crushed. Low income visionaries gagged and many other conversations have been limited by these policies. Conversations about climate destruction, the funding and waging of wars, the transfer of our economic health to the wealthy, corporate domination of society and other threats to our freedom have been silenced. Reclaiming pubic space is crucial. A free society depends on it!

← Trinity – The first detonation of a nuclear weapon
Parks, Permits, and Riot Police: San Francisco Food Not Bombs and Autonomous Occupations of Space →