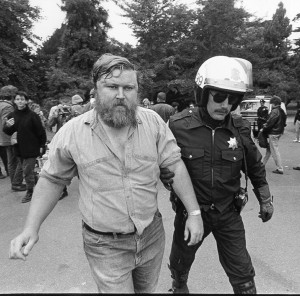 “The president-elect is the most dangerous man in America. The question now, for which there is as yet no answer, is: Who will stand up to him?” — Michael A. Cohen, Boston Globe, December 8, 2016

We the people will stand up to Trump. Not Cohen’s list of politicians and leaders who have been benefiting from the corrupt system that put Trump in power. The post-inauguration chaos could well take America and the world into uncharted territory, so creating a strategy on how to transform America into a sustainable, post-capitalist society will take imagination.

Beware of groups seeking to hijack the anti-Trump movement for their own benefit. You can become disheartened if you spend energy supporting an organization only to discover that the group, presenting itself as the “vanguard of the revolution” or as a well intentioned (and well financed) reform organizations. Efforts like Move On or the pro-corporate Democratic Party front group “Indivisible” are more interested in their own well-being, in “organization building,” could be seeking to equate the Democratic Party with change rather than a transformation society. A lot of these groups will try to recruit you as the crisis deepens, but you don’t need to join their group to be effective at resisting fascism. There are things we ourselves can do to prepare, to fight back.

Forming affinity groups is an important first step. An affinity group is simply a voluntary group formed around a common goal or interest. Such groups typically have five to ten participants who know one another and meet at least once a month, sometimes as much as several times a week. An affinity group provides a space for discussing tactics, strategies, and specific actions. It also provides a place to work cooperatively on projects. Importantly, it also serves as a means of mutual support and validation, a means of overcoming the crushing isolation that keeps people alone, disempowered, and hopeless; it can provide inspiration and stir the imagination in these dark times.

The longer a group works together, the more trust and strength it will have. Many affinity groups are organized in a non-hierarchical manner, often using a consensus decision making process, and are frequently made up of trusted friends. Affinity groups provide a means of organization that is both flexible and decentralized, and that makes it easy for like-minded groups to coordinate their activities.

As an example, the affinity group structure is very valuable in organizing nonviolent direct actions and protests. This process/structure was often used in nonviolent direct actions against the US War on Vietnam, and even more so in the 1970s in anti-nuclear campaigns. Possibly the most successful example using the affinity group model was the shutting down of the World Trade Organization Summit in Seattle in November of 1999.

A number of affinity groups can be formed into what activists call “clusters.” For example, in the effort to stop the Seabrook Nuclear Power Station in New Hampshire, clusters formed in geographic locations such as Boston, North Shore, and so on. All participating affinity groups would send representatives to cluster meetings, and any decisions they made then had to be approved by participants in the member groups.

For large actions, cluster representatives would meet at a spokes council to adopt or reject proposals advanced by affinity groups. This can be challenging, but if all involved seek to come to consensus on clear, simply articulated proposals, it can work, and it did work.

Where this process fails is when large groups try to come to consensus on every minor matter. We saw this problem often during the Occupy Wall Street movement. Detailed discussions of minor things is better kept at the affinity group level, or, even better, are best left to work groups. An example would be food procurement and preparation at large gatherings and actions, which is usually delegated to Food Not Bombs or other work group.

In preparation for the blockade of the World Trade Organization Summit in Seattle, a coalition of affinity groups called the Direct Action Network (DAN) published a “Common Agreements” document. It asked that, no matter what their views on nonviolence as a tactic or strategy, participants honor the agreement during the time of the action. The Common Agreements were: ”Refrain from violence, physical or verbal; not to carry weapons, not to bring or use illegal drugs or alcohol, and not to destroy property.”

Nonviolent direct action preparations were really important in the success of the blockade. Author and activist Star Hawk wrote of the preparations saying:
“In the weeks and days before the blockade, thousands of people were given nonviolence training — a three hour course that combined the history and philosophy of nonviolence with real life practice through role plays in staying calm in tense situations, using nonviolent tactics, responding to brutality, and making decisions together. Thousands also went through a second-level training in jail preparation, solidarity strategies and tactics and legal aspects. As well, there were first aid trainings, trainings in blockade tactics, street theater, meeting facilitation, and other skills.”

One possible reason the direct actions to stop the Dakota Access Pipeline at Standing Rock was succeeding is that the Native American elders had a common agreement worded much like that used during the WTO protests in Seattle, and that they asked everyone interested in participating to take a three-hour Nonviolent Direct Action Preparation.

The spontaneous response to fascism is inspiring. Actions seeking to disrupt the Inauguration on January 20th, the impressive crowds at airports by people rejecting Trump’s ban on immigration, protests against the wall, attacks on reproductive choice and the tidal wave of other repressive policies show that many of us are ready to stop the institutionalization of fascism.

An affinity group structure can help sustain blockades of rail lines, ports, highways, pipelines and other infrastructure needed to continue fascism. Access to food, water and shelter could be impacted for many of us. Our allies of color, gender or differences will need a well organized community of defenders. Affinity groups of food providers, medics, lawyers, artists, authors, musicians, construction workers, seamstresses, plumbers, electricians, gardeners, bicycle mechanics, scientists, yoga practitioners, teachers, software developers, media people and the many other skills will be necessary to sustain blockades, occupations and self defense efforts.

An affinity group can provide both emotional and practical support. The dire reports on our failing society can be stressful. Having close friends in an affinity group to talk with could be essential. Knowing that we have practical support if jailed can make it possible for more of us to take risks. We could share important passwords with a trusted ally and provide access to our homes so plants can be watered and pets cared for. If risking arrest we may want to give a designated member of the affinity group the birth dates, legal names, important people to contact and have a lawyer available. An affinity group could be vital as we experience the advent of “naked fascism.”

If thousands of us dedicate ourselves to forming affinity groups, organize nonviolent direct action preparations in our local communities, build decentralized networks of activists, and plan for an increase in harsh political repression we might be able to provide a solid foundation for opposing whatever Trump, corporate capitalism and fascism have to deliver.

No matter what horrors the Trump period brings, we need to prepare for a long struggle. See you at the next action. Don’t mourn, organize!

← Don’t Feed the Homeless, It Only Encourages Them
Does “Street Feeding” really keep people homeless? →