The Pilsen neighborhood has been forced to live with an abandoned and decaying police precinct at the corner of 23 rd and Damen for 8 years. The building, which is still owned by the Chicago Police Department, is covered in debris and features steel plates over every door and window-a security feature reminiscent of prison walls and border fences. It is just one of thousands of vacant and unused buildings and homes across the city of Chicago, spaces that are kept private through government coercion in order to maintain their market value. In a globalized city at the heart of advanced capitalism, where bond traders exchange billions of dollars in our financial markets, people are still allowed to die of starvation, malnutrition and lack of permanent shelter. In the wealthiest country of the world, the most extreme forms of poverty persist unabated, while buildings that could be urban farms, social centers, living spaces, radical libraries, free schools or free medical clinics are kept off limits through the unending threat of the prison cell and the barrel of the gun. 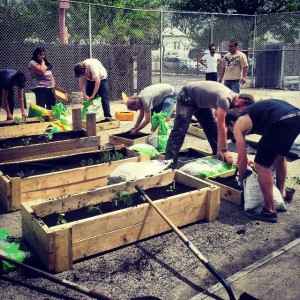 Today Food Not Bombs Pilsen has taken a small step in our neighborhood to combat the ruthless inequality of capitalist society. Instead of allowing the abandoned police precinct to remain privatized and wasted, we have decided to make a garden to grow food and build community power through autonomous food security. In the garden, we will grow fresh vegetables that we will hand out for free at our weekly food distribution. The garden is just one part of our community garden project that features several raised beds placed through out the Pilsen and Little Village neighborhoods. All these beds are growing vegetables to feed whoever is hungry.

Why have a garden on an abandoned police station?

Our reasons are simple. The building’s current condition and its previous use as a police precinct represents the systemic social dispossession necessary for global capitalism. The privatized and restricted status of the building today represents the insane exclusionary social practices required to make sure market exchange is the only medium for accessing the means of survival, political power, and cultural expression. The building’s original purpose, as a staging ground for armed agents of racial-economic apartheid, represents the violence that enforces dispossession. Communities all over the world, whether they be indigenous or urban, are forcibly denied control of their surroundings-creating a global condition of social insecurity.

The necessary dispossession for private accumulation has been a fundamental feature of capitalism since its beginnings, when Euro/Anglo settlers robbed indigenous North American communities to establish plantations and eventually industrial production (and the land on which the cop shop sits today is no different, it is still stolen land colonized by anglo-american society). We can look all around us today and see how social dispossession continues to sustain our market system that benefits a select economic class. The foreclosed and vacant homes peppering Chicago’s neighborhoods are just one example of this fact; people must be kept from autonomous use of their environment so that the marketplace is the only social management system through which life can be lived.

The implicit threat and explicit use of force underwrites our society of dispossession, and the State claims a monopoly on both forms of force. The institution of the police deny us common spaces for mutual aid, ensuring that a system based on elites in boardrooms decides our political and economic destinies. What better example do we have of this basic role of the police in capitalist society then the cruel demolition of the La Casita Fieldhouse in the summer of 2013. We have not forgotten how the community fieldhouse courageously defended and managed by parents of children attending Whittier elementary was destroyed by police agents acting at the behest of Democratic politicians and commercial developers. We have selected the police station because of its close proximity to this scene of vulgar state repression. La Casita was a vibrant example of the commons and its brutal end was a horrendous example of who the police truly serve and why. 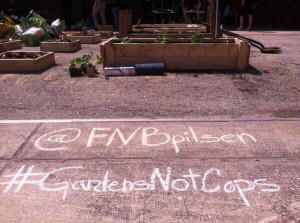 We are living in an historical era in which the contradictions of capitalism have intensified to an unprecedented degree. Radical technological advancements and unparalleled volumes of economic wealth are produced by a society where people still cannot get enough food to survive from day to day. The coexistence of such power with such abandonment is the society of dispossession; the proletariat is kept from enjoying and controlling the products of their creativity and the commons is suppressed to protect the artificial universalization of capital. While it is a small step, we have created this garden to create another space of the commons, to stand against the society of dispossession and demonstrate through our deeds the real possibilities of decentralized communism and social networks of mutual aid. We encourage all radicals who believe in these possibilities to join us in the struggle for the commons, for viable alternatives to capitalism and state violence.

Ask nothing from our oppressors, make no demands from the masters who want nothing but to keep us under the crushing weight of their boot heels. Take back the land, decolonize our relationship to food, and dispossess the system of dispossession. Come and stand with Food Not Bombs in the creative production of the commons.