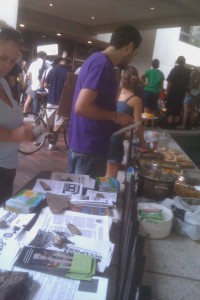 For some reason, the weekend of October 15th was the weekend all the cool kids decided to Occupy stuff in Florida. It didn’t seem to rely on this new “direct democracy” or on people’s actual ideas on how to change the system, everyone just kind of knew it had to happen. Almost as soon as I got to the GA at the Torch of Friendship I left for Government Center because word was someone was already prepared to break camp there. Luckily we’d already brought as much food as we could carry and we collected enough donations to last the camp a couple of weeks, until this guy Peace’s insistence that we refer to the place as Peace City stuck.

Occupy Wall Street’s great and all but aspiring to what few principles Food Not Bombs has as I tend to has made Occupy Miami difficult to watch at times. Occupiers, at different times, for different reasons, would take down the camp kitchen and throw out food, put up signs dis-encouraging the homeless from using their port-potties, and most endemically, spread crazy-ass lies and disinformation to absolutely everybody at every possible juncture. Homeless against housed became an especially pernicious division in the movement, and due to the misinformation campaign who knows who was really behind it.

There’s about 1,500 homeless people that live in downtown Miami. They sleep 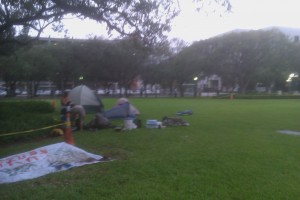 all along the sidewalks and underneath the building overhangs, block after block in downtown Miami. Occupy Miami brought a humungous boost to food donations in the midst of this urban humanitarian disaster and even spurred the growth and tending of local community gardens. But this zero to sixty political mobilization couldn’t sustain Peace City and the surrounding homeless populations and many Occupiers really didn’t think it was in movement’s best interest. Fights in the camp & continuously disruptive participants of General Assemblies drove a lot of people away. Sharing twice a week in Broward County, performing in a puppet collective, and occasionally working jobs meant I wasn’t really around that much either. I believe I slept in Peace City not more than 5 nights in 3 1/2 months. 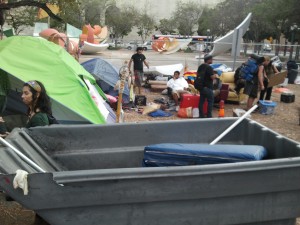 Clearing Camp Prior to Eviction

Fast forward to 1/31 and by the time I got there the most important part of the camp, the homeless population, had already left. At the time it seemed most of the Occupy activists were unwilling to make a stand and the camp was already more than half disassembled. Most had already left for a 2nd camp that was being hastily built up nearby. After finding no one who said they intended to resist I leave for a meeting for our foreclosure campaign, but no one follows as not long after Occupy Miami creates a tiny fort made out of palettes. By the time I get out of my mee

ting I manage to see parts of the ensuing fiasco by phone, where Occupiers dancing to Bob Marley are finally grabbed and detained by riot cops who must’ve gotten tired hiding behind their shields for two hours from 6 indignant dancing protestors. They were all let go but several people were arrested when the cops cleared the streets, including a contributer to Fort Lauderdale Food Not Bombs, Christopher Boot.

The return of the stormtroopers to the streets of Miami was a horrific act of autocracy that we will never forgive the City of Miami for. And yet one Occupier in the palette-fort was quoted as saying “I was dying to get arrested and they just ignored us.”

This raises some really uncomfortable questions. Arrested for what? For defending the homeless? They’d already left hours ago, and all the remaining possessions had already been trashed. In fact, the only thing I’ve ever heard the person quoted in that article campaign about during the last few months was getting rid of “evil communists” and “demanding the truth behind 9/11.”  The Alex Jones samples being re-broadcast through a megaphone didn’t exactly clarify what Occupy Miami’s last stand meant, either. Civil liberties? The vast majority of people who live on the streets of Miami have NEVER possessed such a thing. 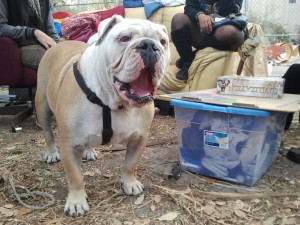 This dog asks a simple question for those that contributed to Occupy Miami’s past and try to make something out of it in the future; do you really think that “getting up and standing up for your rights” counted more than feeding thousands of hungry people in the last 108 days? Standing up for the human rights of other truly suffering individuals, not the incredibly privileged struggle for middle class civil liberties, is what makes a movement worth rallying behind. May we not lose sight of that along with the sight of those hulking corporate behemoths, their ominous 20 foot tall logos mingling with the dim stars above downtown Miami, seeing us to sleep…